Telling the truth is an honorable act: it is not “bashing”

“More and more I feel that the people of ill will have used time much more effectively than have the people of good will. We will have to repent in this generation not merely for the hateful words and actions of the bad people but for the appalling silence of the good people. Human progress never rolls in on wheels of inevitability; it comes through the tireless efforts of men willing to be co workers with God, and without this hard work, time itself becomes an ally of the forces of social stagnation. We must use time creatively, in the knowledge that the time is always ripe to do right. Now is the time to make real the promise of democracy and transform our pending national elegy into a creative psalm of brotherhood. Now is the time to lift our national policy from the quicksand of racial injustice to the solid rock of human dignity.” Dr. Martin Luther King, Jr., Letter from Birmingham Jail.

I am constantly hearing the comment that Bernie supporters, such as myself, are bashing the other candidate.  What this really means is that we are supposed to shut up and not tell the truth about the other candidate.  We are supposed to pretend she didn’t, with her husband, gut the welfare act after speaking about working families in need of help as “deadbeats.”  We are supposed to accept her explanation about the way she labeled black youth superpredators and campaigned for a tougher crime act which increased prison populations in this country, in particular among people of color, and led to a boom and surge in prisons for profit. We are even supposed to forget about her support, in her first Senatorial term, of the bankruptcy reform act, which gutted bankruptcy protections, centuries-old existing relief for debtors, and made it into a punishing act favoring creditors.  We are supposed to pretend she didn’t support going to war in Iraq, and only later on claim it was a bad call on her part, long after everyone else had said the war was a mistake.  We are supposed to pretend she didn’t play an incredible, active role in first supporting the Honduran coup and then preventing the Democratically-elected candidate, Zelaya, from returning to power, or that she brags about being mentored by the Butcher of Cambodia, Herr Henry Kissinger.

The list is endless.  And when you bring out the truth, it is an act of honor, not of dishonor.

Should we also pretend she hasn’t made a living from giving speeches to corporate lobbyists, big banking and creditor interests, the private prison apparatchiks, the fossil fuel industry, anti-veteran groups, etc. etc. ad infinitum and AD NAUSEAM?  Should we, finally, pretend that her campaign now, as was her campaign in 2008 against Barack Obama, has not been filled with tricks, deceitful acts, and posing, aided by a corrupt Democratic Party which needs to be brought down, with their chief honcho, who supports the payday loan industry, at the head of the crowd to be indicted and imprisoned?

I beg most strenuously to differ.

On Friday night I attended a profoundly inspiring memorial service from one of the many victims of Hillary’s foreign policy stances, Honduran environmental activist Berta Isabel Cáceres, who had, during her arduous battle to preserve the rivers in her land from corporate depredation, specifically condemned Hillary Clinton’s role in the coup that unseated Democratically-elected candidate Zelaya.  She is one of many many indigenous victims who are being murdered for their role in defending the planet. 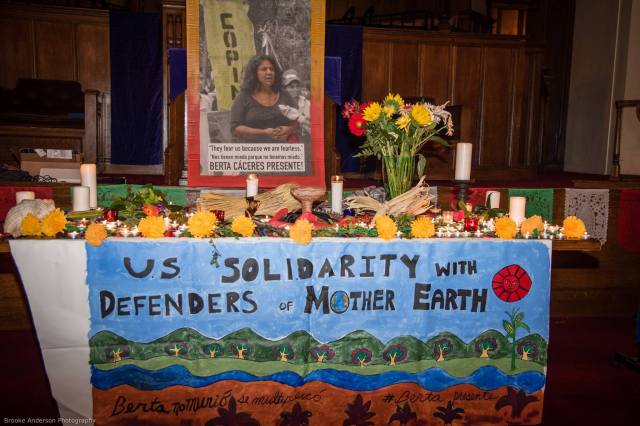 I will NOT, I say it again categorically and so that there is no mistake about it, participate in this latest conspiracy by the corrupt Democratic Party in refusing to tell the truth. Telling the truth is an honorable act.

I refuse to call Hillary’s many terrible acts blunders, just as her support of the Iraq war and of the bombing of Libya were not blunders.  Every act Hillary Clinton has committed has stemmed from deliberate and carefully thought-out POSITIONS from a woman who has always been militaristic and has supported every action of war, nation-building, racist, imperialistic and capitalist aggression.  She and her husband have grown rich at the expense of people of color, the working poor, and the wage slaves both in this country and abroad.  She is a staunch supporter of Empire.

There is too much discussion going on about who would be worse, Trump or Hillary.  I am saying here today that either one is a race to the bottom.  We have an opportunity with Bernard Sanders to begin to engineer a true change, that will end the militarism and racism of the current seat of Empire.

I will not be muzzled.

I will not be silent.

And in the end, we will succeed, because we are finally a people united.  We want our bread but we want roses too.  We carry our martyrs with us, and we continue to struggle, in the knowledge that the people united, will never be divided or defeated.  Onward, then, compañeros, to victory not only in electing the only honest candidate in these elections on either side, but in building and maintaining a grassroots movement that will remove the reigning oligarchy from power and let us finally have government of the people, by the people and most especially FOR the people.  As Dr. King wrote more than half a century ago, “Let justice roll down like waters and righteousness like a mighty stream.