Bernie or Bust, an explanation for whatever friends I have left in this election 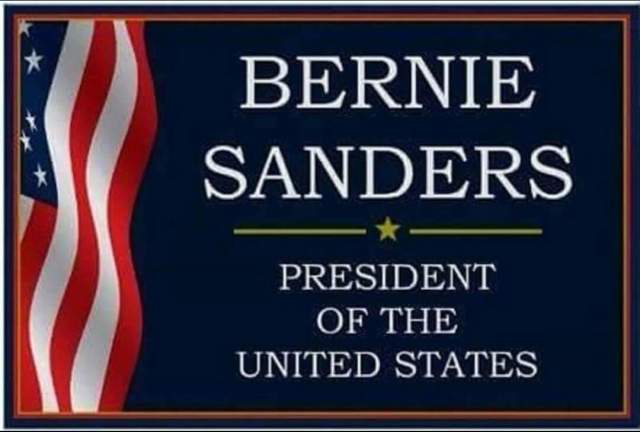 I am doing my nightly crying bit by watching our fan-created, Bernie Sanders videos, from people like us, people who suffer and who have lost friends and family, and who have seen people deported just because, and people who die because they couldn’t afford their medication or their insurance copay, and who are evicted and displaced because of common greed. And I know in my heart that enough is enough, and it’s time we take the establishment on. That includes, for me, Hillary Clinton and the DNC.  I am burning for Bernie and for the hope his candidacy has given me back. I will not settle for any other candidate. This is particularly true of Hillary Clinton, who does not deserve to hold political office under any circumstance. Today’s news that an indigenous activist, Berta Cáceres, was murdered in Honduras, the country whose coup Hillary consented to and whose military dictatorship she was instrumental in supporting as Secretary of State, has made my resolve that much stronger.

Yesterday morning my water pressure was incredibly low and February was a very tough month, I lost a tooth and had the birthday flu, and I have bounced so many checks with my $5 and $10 and $27 donations… so I wondered for a moment if I had forgotten to pay my water bill… Because there are times when we borrow from Paul to pay Peter, unless you live in the privileged world of Hillary Clinton and her Superpac donors. So today I go to Court to plead as an advocate for a widow in her eighties who has been locked out of her place by her stepchildren after 29 years of marriage, and I will say that this kind of thing has to stop, and I will probably piss someone off, and I am sorry so many of my friends are angry with me, but for once, I am following my conscience all the way to the end, and damn the torpedoes.

There are two things I have been doing for many years that have changed the way I think and act probably more than other things in the past, well, actually, three things. The first is my work as interpreter (and translator) for torture survivors, their friends and family, for the School of the Americas Watch, a school run by the United States Government under a different name (Orwellian doublethink) but which is still engaged in the business of training soldiers and police from Latin America in what they call counter-insurgence, but which, to paraphrase Shakespeare, by any other name would smell as rotten. The first time I went to Fort Benning I went as an NLG volunteer, met the wonderful Bill Quigley, and caught that particular burn. I noticed that many workshops were not interpreted, and the interpretation in general was not strong. I would get up and interpret anyway, but I became involved in setting up our current interpreting or bilingual collective, which uses volunteers who give up their time and effort to let people hear from the people we are bringing to the United States to educate us in the effects of our imperial policies.

When I returned, the first woman I intepreted for, Nerys González from El Salvador, had been one of the people teaching indigenous populations to read and write with Archbishop Romero’s corps of “alfabetizadores.” She was 8 1/2 months pregnant and she was one of the survivors of a raid by government militia which killed almost everyone else. She was raped at 8 1/2 months of pregnancy with a flamethrower, and lost consciousness. They threw her in a pile of bodies, thinking she was dead. She woke up months later and asked about her baby… for whom I wrote a song. His death had literally saved her life. That year, when I landed in San Francisco Airport, I could not walk, and although I begged them to give me a minute to get my strength back, I was taken out of the plane in a wheelchair, and had to hear my youngest son yell at me for these “activities that were going to kill me one day.”

So every year, even the year my beloved Jim and my baby brother Mario died, I go to Fort Benning to interpret and sing and sob and call out for people to resist and remember. 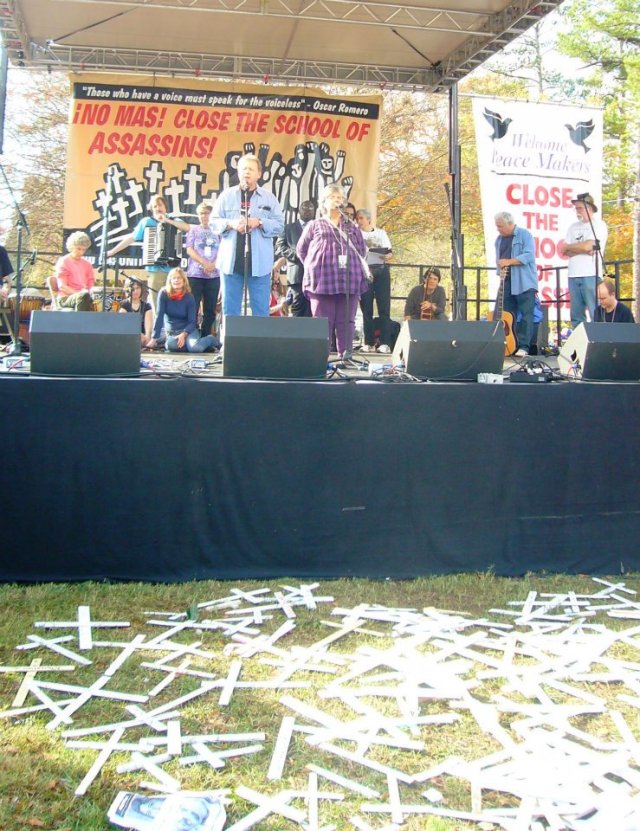 The second thing that has changed me profoundly is my work with the homeless at the South Hayward Parish. I have worked “for” homeless rights for many years, but when we opened our warming shelter three years ago, and I began to sit with people at night, and listen to them and hug them and feed them, it changed me in a profound way. They went from being “a cause” to being my fellow brothers and sisters on this planet. I particularly enjoyed making soups and bringing dishes to share, and having some of them tell me they truly enjoyed seeing me because they so loved my food. Last night I found a small plastic dish with writing on it which was stuck in the back of my mailbox outside my advocacy clinic, from a homeless man who thanked me for my presence and for loving them and he added, “thank you for saving my life.” And I remember that there was a man one night who was suicidal, and we spoke for two hours… and a lot of it included politics, because the city where I live has recently taken to enacting laws that criminalize homelessness, including one that penalizes falling asleep in your car… His note on the dish saved my life yesterday, because I was myself very depressed. 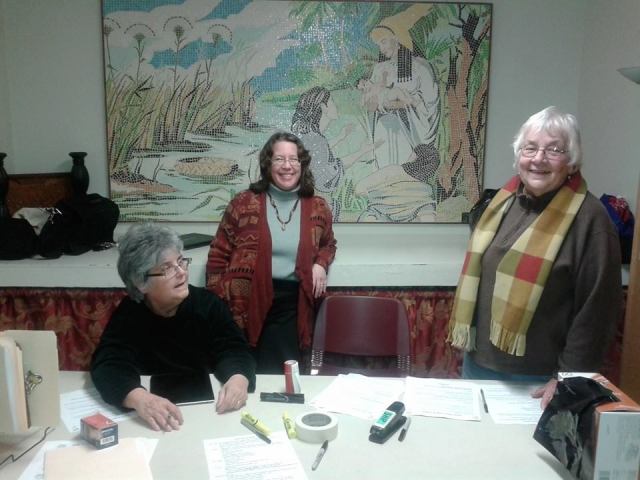 The third thing is the imprisonment of my youngest son, a homosexual man, for drugs, and his mistreatment by prison guards, including their refusal of psychotropic and HIV medication. He was originally arrested for not making a right-turn signal when getting out of a highway, despite the fact that there was no one behind him, and the case is on appeal, but the appeal is taking forever. I was a criminal attorney and a prisoner’s advocate, but it did not prepare me for having one of of my own jailed and battered and abused. I won’t tire you because I’ve written much about it before, and I am engaged in yet another battle against the establishment. For he has been treated shamefully because he is a proud gay male, and a latino, and I have been told I have no “standing” as his mother to do some of the things I am doing and will continue to do in his civil case against prison authorities.

I have long been an advocate against capital punishment and solitary confinement. I participate in a group effort of pen-pals who write to guys in solitary, and I started with one guy, but over time I am now up to five men, including a transgender individual who is receiving hormone therapy while in prison. I share with them some of the things I am working on, send birthday or Christmas cards, books that they ask for… they in turn give me hope, share funny stories, complaints; they have become my people in a different way.

I also do immigration advocacy, including vigils at a detention center that houses mostly immigrants. Most of them are people of color and latinos… The tales of the gruesome conditions at these detention centers are incredible. And so sometimes I have helped a homeless person with small children or people who have no place to stay, or a recently released prisoner, to stay at my home for a week or two or even for a month. It’s a small thing to do, and I hate it that we can be all right in this country with having a four-week-old child sleeping in a car or on the streets. 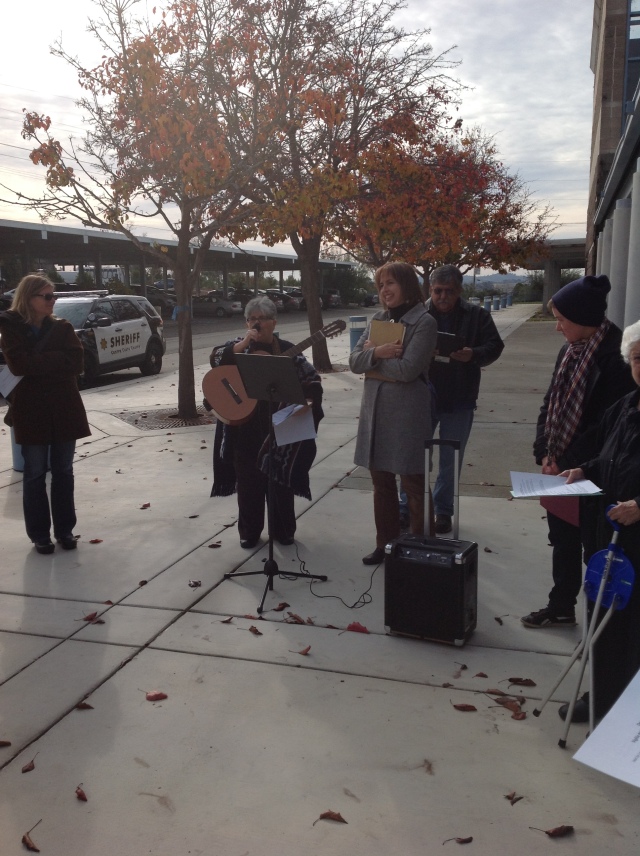 So my friends are angry because I have stated I will not, under any circumstance, vote for Hillary Clinton. I am amazed that so many of the people I have worked with side by side are taking this position. I am amazed that they are letting the establishment, including the DNC, dictate who will be elected, despite Hillary’s many involvements in criminal and inhumane behavior. And I am sorry but I am sick and tired. I can’t and I won’t vote for a woman responsible for the impoverishment of so many, who called people on welfare deadbeats, and black defendants superpredators. I was one of those deadbeats on welfare for three months when my first son was born, the year I started law school, when my claim for unemployment was denied. The Aid to Dependent Children gutted by the Clintons was still in place. I received $345 per month for three months, and I avoided eviction because of that small grant.

And the tooth?  Well, I can’t afford to have it replaced under our current medical system.  And it has made me more humble, because I am now just  one more of the veterans I know with no teeth, or the homeless people I know with no teeth, or any of the marginalized in our society.  With liberty and justice for all means ALL of us, every last single one of us, race, color, creed and size of bank balance notwithstanding.